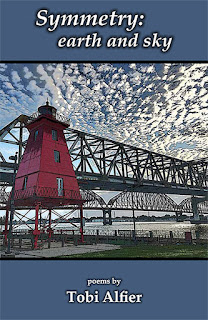 My curse--or maybe blessing—is that I tend to identify closer than safely comfortable with literary protagonists. I say this as a precautionary note because Tobi Alfier's poetry collection Symmetry: earth and sky has taken me through a gauntlet of ups and downs and ooo's and ahh's and gasps of admiration so startling I had constantly to will my mouth shut to avoid drooling on my keyboard and electrocuting myself. This, I would proffer, may explain my admittedly uneven tone as I relate highlights of the richly amazing artistry confronting me with such impact, lifting curtains that reveal entire sagas in my imagination, it was as if, strolling through a museum of memories, I found myself time and again captured by exhibits suddenly springing to life with an immediacy that rendered me helpless to avoid becoming a part of them.
A luxury for the reader—unless he’s tasked with doing justice to the experience for potential new readers seeking the perfect poetry collection, for themselves or someone they love. The trick then is to be sparing with the samples, tease the palate with a tiny taste here and a tiny taste there and yet another and another without revealing so much of the full banquet’s promise ‘twould dull its allure.
And the venues—France, Poland, Brooklyn, New Mexico, Louisiana Bayou, honky tonk Texas, each with its own voice and spirit. You might hear Edith Piaf’s gamin voice railing in the background, sparking through the air of Honfleur as the poet confesses, "I’m tainted, shamefaced and lowbrow...I need a belt of something ill-advised, and a man to drink with me.”
Some lines strike universal chords, their mystic beauty transcending geography. “In fog, even distance seems to roam," breaks through cultural barriers in a poem dedicated to "the old country." In this instance we happen to be in Poland. Grandma "buried the woman part of her" when Grandpa died in "The City With No Vowels...ninety-three years of pierogis and mandel brot packaged, mailed, loved in countries she’d never see, at tables checkered with children she’d never meet, until that day—like the sound of a love letter torn open when no one looked—her beloved husband, our grandpa, dropped a rose petal down and came to find her."
Alfier gives us the grit and grace of people making lives in humble stations, struggling for dignity or simply peace of mind. Take Tasha, whose single mother refuses to beg or prostitute herself, setting the right example for her daughter, teaching her to love and to learn "the crass, hysterically private and bonding language of the women in the market booths, the wily but sincere language aimed at the buyers…"
Visiting a tenement in Poland, where "even the buildings wear gray...the war zone feel falls away as floor after floor creaks to life—voices seep through doorways, and tenement becomes neighborhood, the scent of coal fires and bread baking. Absolute certainty that this could have been your parent’s lives, and they learned comfort. They learned safety. They knew love. Nothing ever changes much, away from anyone’s truth."
Traditional culture slips away when our attention shifts to the New World of barmaids and drifters, treachery and heartbreak, hope, and illusions of opportunity in hardscrabble lives. A young woman about to spend time with a friend looks forward to "a day to remember the quiet goodness of daily blessings...she could get a PhD in disappointment, but no fieldwork will be done today."
Join the young lovers seeking “their naïve truths as the day turns dark as fairytale forests." Lines like this are precious gems that sparkle with promise of a special story in a field of others. Like this, anticipating a Friday night at the Santa Fe Saloon, "I pull my green suede boots out of a box, back of the closet, shake out the spiders, and test ‘em…they built boots to last—don’t matter if it’s cow shit or barn mud, babies, fallin’ out of a canoe, or winning at poker, boots always fit.”
Or, on the flip side, this unnamed “joyless” town where “no one grows better with age...just one foot in front of the other and then you’re dead...a place from which to send history’s most distant goodbye.”
Now a man’s voice, “mad for the woman named Alejandra...the woman who’s name has a carnival lilt, who lights my soul like the moon lights a late night in winter...” whose name he knows only because it’s pinned on her pocket. She wears “no lipstick, no ring, and she don’t even know my name.”
Then just like that we’re in Delta country, where “she ain’t gonna work...forever but they’re suckers for a forgiving face and she wears hers like mercy. At the Hollis House “the air is the color of heat and we’re up to our asses in sweat...we all sit on the porch steps, paper plates full to bending, thankful for a breeze finally stirring, banana pudding chilling in the inside fridge, half-remembered nods of thanks on everyone’s sticky smiles.” Oh, and lest we forget, there’s Ruby, who carries a knife and buys two pair of underwear once a year because “she couldn’t go commando to gym class. Otherwise she didn’t need nothing.”
Sometimes a line leaps out and grabs you with such force you take it with you and forget the rest of the poem. Here’s one: “When the sky is arctic blue there is a silence, the kind that hangs in the air after a slap.”
Plenty more where those came from. The last of the bunch, Postcard to My Son, Roaming the Halls of Academia, leaves us with, “All the world gives you is an inch of open curtain—imagination sets you out into the morning light.” 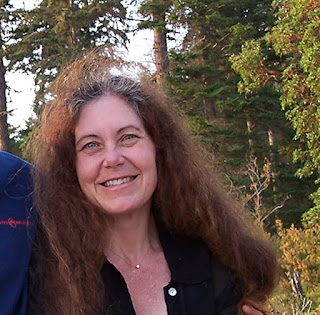 Tobi Alfier is a multiple Pushcart nominated poet and Best of the Net nominated poet whose poems have appeared in… The list is long. It might be easier to name a publication, then scan the list. Chances are she’s in there.