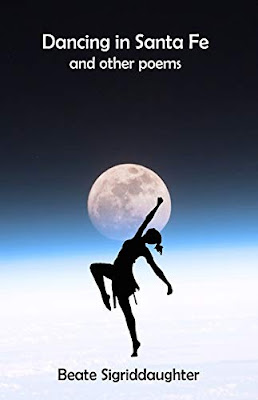 Beate Sigriddaughter dances with breathtaking grace and daring across the pages of her latest offering, a slim volume of fourteen exquisite poems she's given the beguiling title, Dancing in Santa Fe.


A former instructor of dance, and recent poet laureate of Silver City, New Mexico, Sigriddaughter is known for her sparing use of words with a precision so sly nuances can slip unnoticed into the most alert sensibility before revealing their connections to a greater yet not unfamiliar choreography.


Her poetry is widely celebrated for championing women in historically patriarchal cultures. She dedicated her previous collection, Xanthippe and her Friends, to Socrates’s wife, known for pouring the contents of a chamber pot over the great philosopher’s brilliant, balding, bilious head. But while we modern men (excluding me) are likely as deserving of such excremental scorn from the women in our lives as was no doubt the father of western philosophy, Dancing in Santa Fe carries not so much as a figurative whiff of ordure nor does it boast of boots made for walking all over anyone. What Sigriddaughter’s poems do bring is the occasional well-placed blade through the heart, and an invitation for sober reflection on the lack of progress my gender has made over the centuries in its appreciation of hers.


She's hidden from your benevolent contempt in the moss of morning dew. You thought I was going to eat her? – from The Dragon’s Tale


She’s a princess. The dragon has taken her away and hidden her “from your strange world of corsets and obedience...from your male fantasies.” It’s the last poem in Dancing in Santa Fe. The first one plays on a fairytale, The Seven Ravens, about a king who turns his sons into ravens because one of them made a mistake at their sister’s christening. When the girl learned of this she went looking for her brothers. She found them locked in a mountain, but had to cut off her little finger to use as a key to unlock the door. All ends happily, but the last stanza injects this thought: “...if seven girls were cursed because of one son, it wouldn't even be noticed. It happens all the time.” I sat silently, staring at the page awhile.


one generation to the next?


Scheherazade, the legendary murderous Persian sultan’s bride who won his “love” by telling him 1,001 stories, one per night, comes in for lyrical questioning in the poem named for her. The sultan, enraged because his queen had been unfaithful, was killing one virgin per night. Then along came Scheherazade, who distracted him with her tales.


The poet asks her, “Did you save us all or merely raise the bar?” Pause to ponder, and then, “I cannot imagine the cost of making nice with the entitled predator like that.”


But the poet is ambivalent. Neither can she imagine the cost of “not making nice when the cold sword is already drawn.” 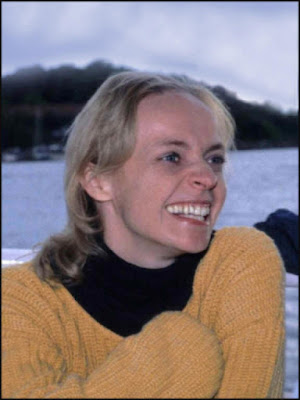 – from the title poem, Dancing in Santa Fe, in which the poet gives us glimpses of a soul struggling to affirm life--how beautiful you are, world, with jewels in the juniper moments after rain. When will I be allowed to touch your beauty and keep it alive?--while “the enemy within just laughs.”


These two forces entwine and grapple continually throughout the poems, as if locked in a deadly tango—affirmation under assault by near crippling dread.


an unspeakable filter on this gorgeous world.

There’s physical dancing in Dancing in Santa Fe: One evening with Chico at the Skylight they “jelled,” and it was wonderful. Then there was Gabriel, who danced okay, but they had a country in common. “Gabriel, all I could ever do is honor your pain.” Her words reach beyond this moment, beyond Gabriel, gathering passion: “I want to honor you, life, by living with joy. The enemy within just laughs. Those others, they just wanted to live, never mind joy…


“Who, not born German, can possibly comprehend the guilt I am condemned to feel for sins I haven't committed? It is an unspeakable filter on this gorgeous world.


“I haven’t danced much since.”

Her appeal for help in undoing “the curse that keeps me uneasy in this shimmering world,” is answered only by the wind in an ancient juniper telling her, “this is the task that has been given to you.”


The “enemy within” is daunting. Yet, “once you learn to dance you never forget.”


In her search for deliverance from this yin/yang dilemma she looks at the Hindu concept of nirvana, which, she tells us, “I don't trust this. I never have,” calling it a “withering of all...just self-effacing consent.”


In Wandering Night Notes she returns to what she knows, and enjoys.


I pray for courage to dance
my anger now, my fear, my dreams,
and dance my hunger loudly.

What is the point of limping through
this superfluous life? Why not
make it a pleasure for each other?

Teach me your scratchy ropes.
I will learn. I will climb. I will love.