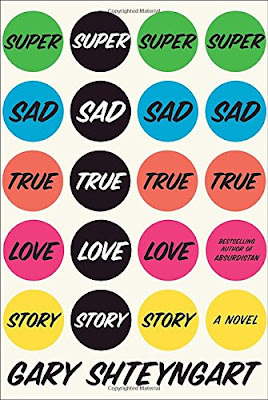 It’s taken me three readings of Gary Shteyngart’s Super Sad True Love Story to recognize finally my vague discomfort accepting the presumption of sadness at this exceptional novel’s ironic ending. That’s one reading every three years starting with 2013, three years after its publication. The trienniality is coincidental—unless, as suggested by Shteyngart’s Tweeted tribute quote on the death last week of his beloved Random House editor Susan Kamil, "He did believe, dimly, in a democracy of ghosts. The souls of the dead, perhaps formed committees, and these, in continuous session, attended to the destinies of the quick."


It’s from Nabokov’s novel Pnin. Shteyngart added, “I would like to believe this is true. Farewell Susan.”


Accepting it as true, why not take it a step further and believe one of these dead souls’ “committees” has been goading me to fathom the elusive mix of emotions I experience at Super Sad’s ending? Not that it would matter particularly to anyone else. And yet, there is a confluence of sorts that might well be calling to certain of the quick to, in a social media vernacular, “Get off your asses, and be quick about it!”


I feel this urgency. It’s the reason I’ve started reading William Vollmann’s massive two-volume report on the virtual demise of our species. In the first third of Carbon Ideologies, which is as far as I’ve gotten, Vollmann’s focus is on the nuclear generating disaster at Fukushima, Japan in 2011 (a year after Super Sad was published). He’s written it as an explanation to possible survivors of what he sees as inevitable climate catastrophe. His writing is framed as an apology to future inhabitants of Earth, and, less directly by presuming its inescapability, scaring the living crap out of those of us who still entertain an implausible hope of somehow averting the disaster. “I knew I’d find no adequate personal answer to the question ‘What should we do?’” he tells these theoretical survivors, “But I felt ashamed of doing nothing. Well, in the end I did nothing just the same, and the same went for most everyone I knew. This book may help you in the hot dark future to understand why.”


I feel the urgency also because of the political imbroglio we’ve permitted that exacerbates the disparities in our society, and because of the growing passivity of a culture easily distracted and manipulated by cheap entertainment, with its expectations of titillation, comfort, and the illusion of freedom.


This awareness was less defined when I first read Super Sad True Love Story, which I was enticed to read by a review Maureen Corrigan broadcast on NPR. What got my attention, perked my interest, induced me to buy the book was Corrigan’s description of a fictional near future that struck me as already incipient in its drift toward a junction of chaos and control. It rang of Orwell and Huxley, 1984 and Brave New World, but with comic twists and an endearing familiarity. As then New York Times critic Michiko Kakutani put it, “Mr. Shteyngart has extrapolated every toxic development already at large in America to farcical extremes.”


Reading it the first time I focused on the distance between then and Shteyngart’s fictional future. And, of course, there was no avoiding the love story between 39-year-old second-generation Russian Jewish immigrant Lenny Abramov and 24-year-old second-generation Korean immigrant Eunice Parks. This story, told by way of diary entries and social media conversations, provides the narrative train through Super Sad’s dystopian landscape, yet I found my interest veering more toward a skeptical voyeurism than empathizing with the obviously mismatched couple. Whether the concept of true love is realized between Lenny and Eunice, who could say with any certainty? Kakutani clearly thought so, as did several other reviewers who discussed the book at the time. I see the two as using one another, each for different reasons. But maybe that is love. Maybe it’s only love’s illusions I recall (thanks, Joni). I waxed enthusiastic with the brief piece I posted here in 2013 after the first read, but not about the romance.


“At least one of Super Sad's predictions, that books will become dangerously unfashionable, has already almost come to pass,” I wrote then, adding, “It's one of the funniest, gloomiest social satires I have encountered.”


Three years later, after my second read, I still didn’t try to review the book, intimidated probably by the enthusiastic gushings of Kakutani, Corrigan and others, including Terrence Rafferty in Slate. Looking back, I find I like Rafferty’s best of the three reviews. He gives more plot and details. I should condense plot and details down for you myself but after reading the professionals I’m stymied, as if doing so would be akin to fashioning a Fabergé egg out of paper-mâché. Instead I’ll give you a link to Rafferty’s review: here.


So, there you have it, something you can hold against me forever, depending on how much “forever” we have left to live. A book I’ve read three times over the past six years, and still haven’t gotten up the gumption to do it justice. And yet, still, on the verge of hysteria, I implore you to read the damned book BEFORE IT’S TOO LATE!!


Wait! I just went back and re-read the ending, the last chapter, one more time. I see now the cause of some of the ambivalence I’ve been feeling about it: I wasn’t ready for so abrupt a change in tempo. The main narrative had me rushing, frantically, to the apocalyptic edge, the unendurable sensation of imminent void. The last chapter, "27 – Welcome Back, Pa’dner,” begins with a sense of free-fall, a little relevant backstory, just enuf to offer the racing mind a more contemplative speed. It works, I suspect, for most readers. Not for me. My cognition is sluggish, slower to shift. My inner brakes were screaming as I tried to decipher how the words I was reading fit with my despairing terror of the calamitous denouement I'd been approaching. Then the cinematic break taking me from Kansas sepia to the Technicolor of Oz. Stumbling with contradictions, my ambivalent feet carried me to a place where at last I could sit and sort things out. And where I could appreciate the language, the secret humor, the tranquility and the beauty of simply being alive, no matter what future lay beyond the next heartbeat. Reading this chapter a fourth time, without the preceding headlong dash, I finally appreciated what Shteyngart had done. And despite the title and the scrambled emotions throughout, I believe he and I, on this point, are of one mind.


If so, this might help explain my inability to fully embrace the sadness others have found in Super Sad True Love Story. I see it as a sadness compromised by foolish expectations. A vanity. A sadness we deserve.


My advice: Find out for yourself.