“If love were the only thing, I would follow you—in rags, if need be—to the world's end; for you hold my heart in the hollow of your hand! But is love the only thing? I know people write and talk as if it were. Perhaps, for some, Fate lets it be. Ah, if I were one of them!

"But if love had been the only thing, you would have let the King die in his cell. Honour binds a woman too...my honour lies in being true to my country and my House. I don't know why God has let me love you; but I know that I must stay.” – from The Prisoner of Zenda

Thanks to Anthony Hope I am weaned from romantic love's impractical glow, shone on me of late by James Hilton and Anthony Hope. By accidental coincidence Hope bookends my flirtation with the notion of a love so fine between a man and a woman—requited or not—that it's truly unto death. I was beginning to warm to the idea, expressed so richly in Hope's Zenda trilogy and Hilton's Random Harvest. One more throat-tightener like those and I might have started searching Facebook for Norma with the Mona Lisa smile I haven't seen since the last kindergarten reunion I made it to somewhere in the past. Just to make sure, see if the heart was still game whether or not the brain remained intact. Fortunately, in the nick of time last week, Hope's The Dolly Dialogues intervened and stopped me from hurting myself and others. 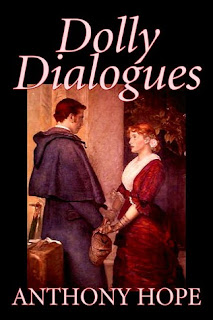 The notion of romantic love is a many splendored laugh in The Dolly Dialogues, a series of vignettes narrated by “man about town” Samuel Travers Carter, describing his dalliances with “Lady” Dolly Mickleham and her titled acquaintances. All except callow young men are cynics regarding the love of the Zenda stories.One such youngster, Carter's cousin George, confesses he desperately in love, claiming he's “the most miserable devil alive.” He blushes and his hand trembles when the girl rides by in a carriage with an older woman. Carter introduces him to Dolly with the suggestion the girl might show up at one of Dolly's frequent parties. Carter tells Dolly George is in love, and suggests maybe, because she is married, she can assist the young man.
“Dolly glanced at George. 'Oh, what fun!' said she.
“'Fun!' cried George.
“'I mean, how awfully interesting,' said Dolly, suddenly transforming her expression.”
Of course within a blink or two, George shifts his romantic interest to Dolly, seeing her as the love of his life. He no longer blushes when, soon after meeting Dolly, he and Carter are walking in the park when the other girl drives by in her carriage. “'George, George!' I cried. 'There she is—Look!' George looked, raised his hat with sufficient politeness, and remarked to me: 'Hang it, one sees those people everywhere.'”
Hope makes it quite clear, considering the limitations of Victorian literary convention, that Carter and Dolly, although they're cousins and she is married, have been lovers, and perhaps still are. It's also obvious that Dolly, despite paying lip service to the idea of the Zenda sort of love, is just as cynical as Carter. At her invitation, Carter reads from a guest book containing comments about her she's invited from acquaintances:
“Lady Mickleham,” I read, “is usually accounted a person of considerable attractions. She is widely popular, and more than one woman has been known to like her.”
“I don’t quite understand that,” interrupted Dolly.
“It is surely simple,” said I; and I read on without delay. “She is kind even to her husband..."
“She never gives pain to any one, except with the object of giving pleasure to somebody else, and her kindness is no less widely diffused than it is hearty and sincere.”
“That really is nice,” said Dolly, smiling.
Then there's Carter's dream that he and Dolly are dead and awaiting at the door to Elysian Fields. The gatekeeper, Rhadamanthus, denies Carter entrance. Now it's Dolly's turn. Rhadamanthus starts out noting negatives in the book he uses to guide his judgment:
“The account runs on,” he explained, and began to consult his big book. Dolly leant back in her chair, slowly peeling off her gloves. Rhadamanthus shut the book with a bang.
“It’s not the least use,” he said decisively. “It wouldn’t be kind to pretend that it was, Lady Mickleham.”
“Dear, dear,” said Dolly. “What’s the matter?”
“Half the women in London have petitioned against you.”
“Have they, really?” cried Dolly, to all appearance rather delighted. “What do they say, Mr. Rhadamanthus? Is it in that book? Let me look.”
And she held out her hand.
“The book’s too heavy for you to hold,” said he.
“I’ll come round,” said Dolly. So she went round and leant over his shoulder and read the book.
“What’s that scent you’ve got on?” asked Rhadamanthus.
Awake again, Carter is dallying with Dolly in her backyard. Carter reads aloud an inscription someone had carved into the sundial there: Life is Love, the poets tell us, In the little books they sell us; But pray, ma’am—what’s of Life the Use, If Life be Love? For Love’s the Deuce.
Dolly began to laugh gently, digging the pin again into her hat.