Five "bookings" now. I started with the fifth (most recent) in Dana King's Penns River police procedural series after reading a piece he posted on a mutual friend's blog. I liked "Pushing Water" so much I decided to read them all. Hooked more by the characters than on the plots--as usual for me--but I did find the plots, twisting their way thru all five novels as grist for the policing skills of Penns River's finest, are clever enuf and realistic enuf and surprising enuf to keep me clicking up the pages of my Kindle editions with pee breaks my only interruptions. 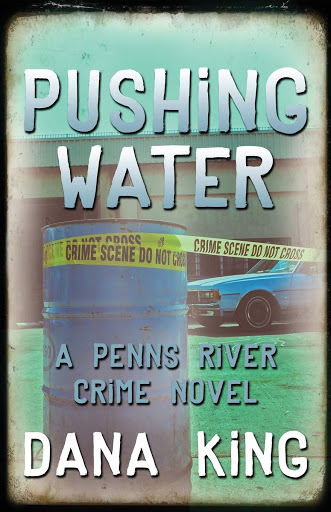 By the time I'd finished the series' first four, I knew this small town police department so well I half-expected to get a call from Chief Stush reminding me to bring donuts to his office for the morning meeting. I got to know some of the crooks, too. And even some of the snitches. "Something should still be done about evolutionary cul-de-sacs like Dwight Wierzbicki," Det. Dougherty observes in "Worst Enemies." A little later, frustrated by Wierzbicki's waffling, Dougherty grumbles that the snitch, a petty miscreant they call The Bick, "could inspire the Dalai Lama to steal a knife to stab him with."

Dougherty (pronounced Dockerty, thus his nickname "Doc") loves to engage in "ball-busting" with associates and friends--even an FBI agent he meets for the first time.

“My God,” Doc said. “A federal officer, come right to my house. What can I do for you?”

“You could invite me in,” the man said.

“You could show me some identification,” Doc said. “It’s not just Feds who dress unimaginatively.”

While sipping beer in Doc's kitchen, the two continue such bantering. The FBI guy gives as good as he gets, but Doc's zingers are best: “I went to school with a girl named Kathryn Whitlock. She was, well, slow, and that’s being charitable. We used to call her Special Kay behind her back.” He took a swallow. “I just assumed Special Agent had the same origin.”

Humor pops in constantly, some of it predictable, like the ubiquitous ball busting banter, but surprises, as well. There's a marvelous double barfing scene involving a hungover husband fleeing his enraged wife. Hubby runs in front of a car, ends up on the hood where he upchucks all over the windshield moments after the car's driver heaves all over it from inside the car...I guess ya gotta be there.

Then there's the casino blackjack dealer "a greasy little shit who spent the night trying to look down Mary’s blouse.” The dealer's name? Steve Onan.

The series' ensemble cast includes some criminals, as well as cops. There's the local Italian mobster, and one of his lieutenants, a tall guy called "Stretch." After deciding to promote Stretch's 6'8" nephew from car thief to collector, and arguing what his nickname should be, they settle on "Stretcher."

But enuf about my opinions, except for this: These novels are terrific fun. Please enjoy them, and record your own opinions here. You wouldn't want Mike "The Hook" Mannarino to have Stretch strap you to the backboard behind his house and throw fifty fastballs at you, would you now?

In chronological order, starting with Worst Enemies, the series includes:

I'm more than ready for Dana to book #6!