If I do something unusually stupid today, say, something that gets me in trouble with the law, I'm suing Bill Johnson.
Bill Johnson, in a novel written under the improbable pseudonym William E. Johnson, kept me up waay past my usual bedtime last night unable to stop reading A Silent Tide until I'd reached The End. This rarely happens to me, and I read a lot of novels. I'd say A Silent Tide is “a page turner” were I inclined to use clichés and, more objectively, had I read an actual book. I'm not, and I didn't. I read Johnson's crime thriller on my laptop, having downloaded the Kindle version from Amazon.com for a measly three bucks. Thus, in the interest of literal accuracy, I shall say that for me A Silent Tide was a page scroller. 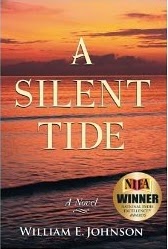 I shall also say, to disabuse any cynics itching to suggest Johnson paid me to call his novel a “page scroller”, it was not at first. After a ratatattating hellishly bloody gunsmoke-reeking prologue (which you can read for free by clicking here) the pace downshifts a tad as Johnson spends more space than he needs introducing his lawyer hero, the hero's perfect family, and the supporting cast, which includes the idyllic environs of the novel's setting: marvelously Norman Rockwellish (Southern style) Mathews County, Virginia. These details he might have spread more evenly throughout the narrative to avoid having them hit like speed bumps jarring the hero's 1986 Porsche 911 SC in a flat-out run on an empty stretch of Route 14 several hours before sunrise when even most of the drunks are off the road, one way or another.


These kind of speed bumps are not uncommon—necessary, in fact—for authors crafting a feel of reality rather than simply a radio script of dialogue and cues for sound-effects and dramatic organ riffs. With most thrill novels I find the bumps convenient spots to close the book for the day with the comfortable sense that I am the one in control, not the author. A Silent Tide did not allow me the luxury of this illusion.


I hate suspense. Hate it viscerally, get nervous, angry, and claustrophobic. I tremble, pace, nibble things, get up to pee too often, scream if I think I can do it without getting busted...(This could go on awhile. I'll cut it off here, but feel free to suggest other examples of neurotic response on your own time.) Despise it. Suspense. Oddly, though, obvious cliffhangers at the ends of novel chapters ordinarily amuse me, because they perhaps unwittingly give me a glimpse past the suspense they hype, relieving some of the hideous tension I otherwise would experience.


I didn't have this advantage with A Silent Tide. There were cliffhanger teasers, of course. No good thrill-writer can dispense with them. But all Johnson's did was heighten the shrieking anxiety that grew the more intolerable with each page, despite the speed bumps. I could not trust my imagination to make the leap of certainty that what came next would be what it should be so I could close my laptop and sleep, confident that when I awoke refreshed next morning the story would be waiting and would confirm the development I'd pretty much predicted. With A Silent Tide I couldn't be sure. What was happening was too unpredictable, too hinky, as the cops in A Silent Tide might say. So I had to know. I couldn't let it go. I had to scroll, and I did. All the way to the end.


But even then I couldn't sleep.


Kept hearing noises in my apartment. Clanks, clicks, scraping... Was it a Mexican drug cartel hit crew come to eviscerate me because I'd read A Silent Tide and now knew how their sophisticated smuggling operations went down? Was it the chef from Anna's here to silence me because I was privy to the recipe for a perfect bowtie pasta dish our hero succulently describes as he prepares it in A Silent Tide? Was it retired Mathews Circuit Court Clerk Eugene Callis enraged that I'd read a description of him as a Col. Sanders lookalike without the goatee? Was it William E. Johnson himself, terrified I would note in this report a typo that had slipped through the production of A Silent Tide, misspelling or confusing “averse” with “adverse”?


I could go on listing possible nemeses, I suspect, were it not that the expanding multitude of them hovering over my sleepless head, having sprung from the pages of A Silent Tide, abruptly dispersed at the sudden raucous duet of crow twins Clarence and Clarke greeting the rising sun outside my bedroom window.
Posted by Mathew Paust at 11:27 AM