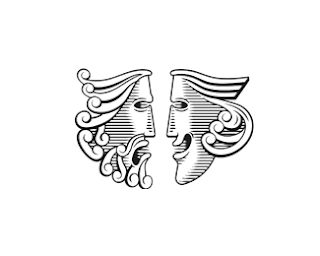 My two published novels and their work-in-progress sequel may feel confident they'll win recognition some day, but this doesn't do their creator much good. By the time their adopted once venerable genre struggles back from exile to its rightful place in the commercial canon he will long have drifted to the predictable unpredictability of mystery and crime fiction. It might even come to pass that by then his name will appear, in the service of accuracy, with the modifier “the late”.


Too late to bask in the glow these three novels could have earned, being in the redeeming vanguard of a genre that's fallen shamefully over the years, devolving from the respectability of Chaucer and Shakespeare into a shabby cudgel of disparagement.


“What a farce!” The disgust curls its lip at the target, which could be anything from a tasteless hamburger to a government to life itself: “There are times,” said Mark Twain, “when one would like to hang the whole human race, and finish the farce.”


I suppose the word's loss of dignity, from theatrical form to curse, can be blamed on the lower status of comedy in plays such as “The Canterbury Tales” and “The Comedy of Errors”compared with something more sophisticated, such as satire and parody.


V. S. Pritchett, British writer and critic, put it this way: “The difference between farce and humor in literature is, I suppose, that farce strums louder and louder on one string, while humor varies its note, changes its key, grows and spreads and deepens until it may indeed reach tragic depths.”


I prefer the Jones definition because of its greater clarity. I wrote the first two novels thinking they were political/social satire. My thinking hasn't changed, yet from a marketing point of view I've come to see the word “satire” as a tad pretentious. And this overthinking has birthed a sniggle of doubt that my work passes muster with the conventional interpretation of just what a bonafide satire must be.


Better to play it safe, then, whether or not this doubt bears merit, and notch down the hype and thus the expectations of potential readers.

For whatever reason – mass marketing, movies, early comic books, TV – popular fiction has become Balkanized into distinct types, each following an established rubric applying to structure, character, story and even tone, and each with a devoted readership. Even without a cover design depicting violence, sex and looming doom, it doesn't take a fan of noir more than the first sentence or two to know the real thing. One can assume from “The guy was dead as hell,” which opens Mickey Spillane's famous “Vengeance is Mine”, that the pages ahead will deliver one helluva hard-boiled caper. If, instead, the next sentence is, “Dear, I really wish you wouldn't use such language around the children,” the book could get tossed across the room if it doesn't fall to the floor in a gale of gasps.


A book provoking such surprise might have done so intentionally, as humor -- a satire, perhaps, a parody, or...drumroll...a farce. It wouldn't be called a farce today, of course, even if it met Chuck Jones's definition. Satire or parody, some other sub-category of humor, or simply “humor”, but until it manages to throw off its stigma farce will not be among the contenders.


This is not fair to those of us who write farce. I say this with reluctance, knowing it gives off, as Mailer might have said, the stink of snivel. Yet I whimper shamelessly, not only for myself and the possible other writers (I know of none) who fly the farce flag fiercely, but for the legions of those who create intentionally humorous fiction. We aspiring funnymakers have no easy visibility in the grandest of bookselling bazaars – Amazon.com. There we must smuggle our products into one of the categories where market analysts find eager or at least willing readers.


A glance at this year's Amazon Breakthrough Novel Award contest reveals only five categories: Science Fiction/Fantasy/Horror, Mystery/Thriller, Romance, General Fiction, and Young Adult Fiction. The winners in each received an Amazon publishing contract, while the grand prize winner, which this year was the top Young Adult Fiction entry, got a contract with an advance in royalties of $50,000.


Missing from the list of presumably hot genres was anything that suggested humor in any of its forms. Had he wished to enter his devilishly sly baseball satire CannaCorn, Boston humorist Con Chapman would have had to steal it into General Fiction as the category least likely to confuse and offend the amateur judges who did the competition's initial screening.


I entered mine in Mystery/Thriller because it has mystery and thrills, suspense even, but none arranged in accordance with the customary narrative architecture for those two genres.


The nature of humor itself is partly to blame. So many nuances, so many personal tastes – intellectual, toilet, slapstick, droll, dry, silly and sly. Readers looking for laughs -- just guessing -- are without question fickler than those seeking bodice-ripping romance. Why trust your hunger for blessed laughter to an unknown? Stand-up club comic bores you, you hurl garbage at the stage and wait for the next one. Banish with an angry click the same jerk on TV.


It's harder to find the same satisfaction rejecting a dud book you've paid for, and the guilty writer's punishment is less timely and distinct. Too great a lapse after the fact to rationalize and cast the blame elsewhere.


A conceit of writers is that we are artists, although we modestly – and more realistically – restrain our voiced aspiration to the study of craft. Just as well. As artists we shouldn't give a hoot what readers think or want. We forfeit that notion letting commerce shape our conversation with them. Yes, the irony is farcical.
Posted by Mathew Paust at 1:27 PM